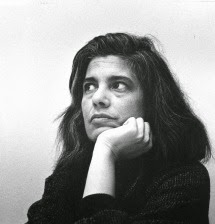 Last week I reviewed the beautiful and informative documentary Regarding Susan Sontag, which makes its HBO premiere tonight (check your local listings for air times). Thanks to HBO, I was able to talk with filmmaker Nancy Kates and ask her some questions about the documentary and about Susan Sontag.

Although I asked Nancy (NK) three specific questions, our conversation wandered in a natural manner, rather than taking on a straight interview format. We covered a lot of territory, and instead of providing you with a transcript of that conversation, I'm sharing the highlights. (Photo credits are at the end).)

One thing that I and almost every other interviewer commented on was the number of people in Sontag's life who were willing talk about her on film. In Regarding Susan Sontag, you'll meet Sontag's sister, son, and various friends and lovers. I asked Nancy if there were people who were not willing to be filmed. She told me that many people declined to be part of the film, but most didn't say why.

One person who turned them down was Salman Rushdie, whom Sontag bravely supported during the fatwā in 1989 over his book The Satanic Verses. This episode in Sontag's life was ultimately left out of the film, not because of Rushdie's nonparticipation but because there simply wasn't enough run time to explain the book and the context of the entire incident:


NK: Susan Sontag was president of PEN at the time that Rushdie was threatened with the fatwā . . . the beginning of it. She was very heroic in saying we need to support him, we need to support free speech, we need to stand up to what at that time she called international terrorism. And this was at a time before 9/11. Americans were not thinking about fundamentalist Islam or threats to the West based on extremism.

We ended up not using this segment. Not because Rushdie didn't want to participate but because it was too hard to explain what had happened [including riots and deaths in Pakistan and England] over this book. There was even a bookstore in Berkeley that was bombed over The Satanic Verses. . . .

[Sontag] was very heroic and courageous, but [in the film] we just see her introducing herself at a press conference as the president of PEN, but we don't know it's about The Satanic Verses.

Although I remember the fatwā, I either didn't know or had forgotten that Sontag took a public stance in support of Rusdie. I'm not sure I would have been so brave, but Sontag was known for her outspokenness and unrelenting desire to expose reality.

Our conversation then turned inevitably to Sontag's personal life, in particular her sexuality. I wondered if younger viewers would understand Sontag's reluctance to come out of the closet, given the more tolerant atmosphere in the twenty-first century than in the postwar years and even through the 1990s. Nancy reminded me that even today

I totally agreed with Nancy but wondered if Sontag would have had to worry about public persecution over her sexuality. Nancy pointed out other reasons for Sontag's desire to stay in closet:


NK: There is a difference between being persecuted and not being respected fully. [Sontag] was worried that she would not be taken seriously if she came out about her sexuality. She was worried she wouldn't be taken seriously as woman because most women had not been at that time. The thing that has been revealing to me in showing the film is that it occurred to me since April [the Tribeca premiere] that lesbian intellectuals are not taken seriously even now.


NK: people were clamoring for her to come out because they wanted her to be their icon and hero. But she refused. . . . She did not want to be put in a box about her sexuality or about anything else.

Finally, Nancy Kates and I talked about what Sontag would have thought about today's social media. I want to make it very clear here that Nancy was simply sharing her own ideas. She in no way whatsoever was presuming to speak for Susan Sontag.

So what would have Sontag thought about Instagram and Twitter, given her concerns expressed in On Photography and elsewhere that people tend to remember the image more than they remember the event or the words or the facts? Nancy noted that Sontag couldn't have imagined our current technology in the 1970s,


NK: when some of the essays in On Photography were originally written. So that was forty years ago that those essays were written. Sontag couldn't possibly have imagined Instagram and Tumblr and Twitter at that time. . . .

But her pointing out that we don't remember the thing, we remember the photograph [is both true] and terrible.

I just wish she were still with us so she could talk about things like the Eric Garner protests during which almost every single person who was out there was shooting videos or stills. We live in a Sontagian world, a world that she described in great detail in On Photography, but then more so. . . .

And we're having a lot of problems with emotional overload--what do we do with all these images? There are too many of them, and they are more powerful than words.


NK: Twitter, on the other hand, Sontag would probably find particularly abhorrent. She would likely have found it to be a lot of noise. This was a person who didn't own a television because it was too much noise. So I can imagine that she wouldn't think Twitter was a good idea.

Nancy concluded by noting that Susan Sontag was "a thinker and rethinker, writer and rewriter." Today it's all about the instant, and that's the part that would likely bother her. Ultimately, Sontag would have probably asked,


NK: Where is the time for reflection?

Again, I want to thank Nancy Kates for taking the time to talk with me about Susan Sontag and about her important documentary Regarding Susan Sontag, which airs tonight on HBO. I encourage all of you to see the film. Sontag was one of the most important thinkers and social critics of late twentieth century and her thoughts still resonate today.