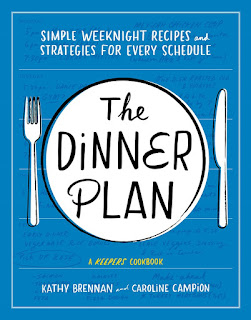 This hasn't been a great week for cooking, mostly because it's been hot, hot, hot in my area. Every day we expect rain: the sky gets dark, the humidity rises and then . . . nothing. Just hot, sticky, heavy air. Ugh.

The heat also seems to drain my inspiration and energy, so I turned to my trusty The Dinner Plan by Kathy Brennan and Caroline Campion (Thanks #AbramsDinnerParty), and looked for meals that wouldn't heat up my house. No central air = please don't turn on that oven!

One of the dinners I picked was their Faux Cubanos, which required only a minimum of heat. Though I own a sandwich press, I opted against using it and instead grilled the sandwiches in a cast-iron skillet, as per the recipe.

I did things slightly differently from the recipe in the book. I don't know if our pitas were bigger than theirs, but we needed extra cheese and ham to cover the bread. So where the recipe says two slices of cheese and ham, we used three. Also, I am not a fan of mayo so we cut the ingredients in half and used the sauce on only one sandwich. Mr. BFR said the sauce was good. The photo is scanned from the cookbook because I was just way too lazy and too hungry to set up a photo shoot.

In a medium skillet or grill pan, melt 1 tablespoon butter over medium-low heat. Add one sandwich and put a heavy skillet on top to weight it down. [I just kept pressing down with the spatula.] Cook until golden brown and the cheese has started to melt, about 4 minutes.

Carefully flip the sandwich over and add 1/2 tablespoon butter to the pan, lifting the sandwich as it melts so the butter gets underneath. Top with the skillet again and cook until golden brown and heated through, about 3 minutes more. Transfer to a cutting board and let sit for a couple of minutes before cutting into half or thirds. [We covered the first sandwich in foil while we grilled the second one. We cut them into fourths.]

I served this with a very simple salad of mixed greens, heirloom cherry/grape tomatoes cut in half, and a variety of thinly sliced radishes. I made a lemon vinaigrette for the dressing. I got the idea from the Fresh Food Fast cookbook from Cooking Light.

Note: Recipe and scan used with permission. All rights remain with the original copyright holder.


Shared with Weekend Cooking, hosted by Marg at The Intrepid Reader (and Baker) and Super Sundays hosted by Deb at Kahakai Kitchen